Welcome to the first of many guides on EFT-Ammo! Expect many more guides written about a variety of (advanced) topics about Escape From Tarkov written for newer, returning and even veteran players. Written by Seikosha - BSG Sherpa, competitive player & content creator.

Grenades can be extremely useful and powerful in Tarkov - if used in the right way. Grenades aren't actually meant to kill people with (although throwing an impact nades at someone works just fine) in most cases - but can be used in a wide range of opportunities to put a fight in your advantage.

Are you stuck getting grenade kills for Prapor's grenadier? Need advice & tips from an actual BSG sherpa about when and how to use nades? This guides will explain you what grenades there are in Tarkov, how to obtain them & how to use grenades as a weapon but also as a tactical tool! 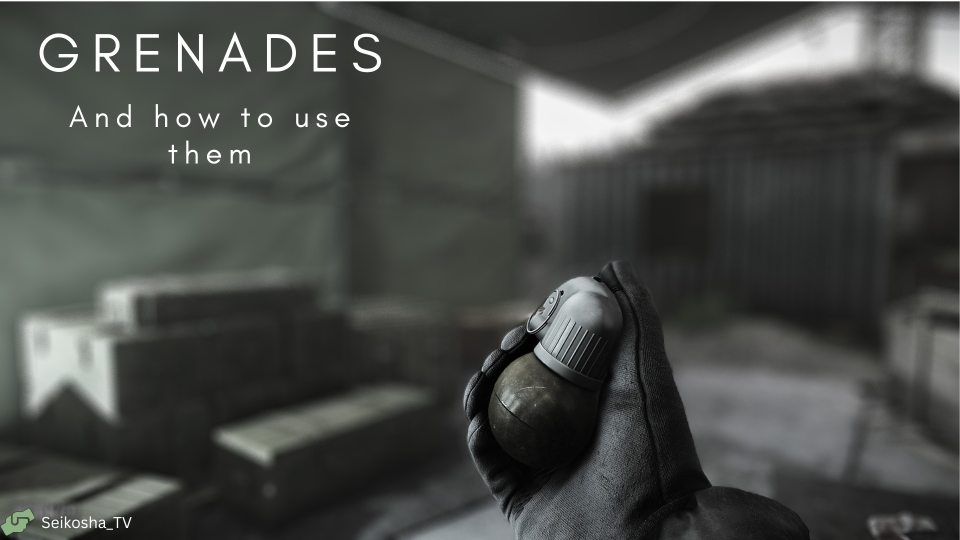 There is various Grenades in Escape From Tarkov with different usages & utilization & fuze times. We will list them here from long to short fuse: M67, RGD-5, F1, VOG-17, VOG-25, RGO, RGD. We'll cover how and when to pick what grenade in a bit.

Starting with the F1, RGD & M67 these are among the most-used classic grenades in Escape From Tarkov. Especially the F1 and RGD-5 are your classic nades which you probably end up using most of the time. We'll cover the M67 later on in the guide!

The VOG-17 and VOG-25 are feared by most PMC's as they have a really short fuze thime, making it almost impossible to run away from one of these being thrown at your feet.

Added in 12.10 - We have a love / hate relationship with impact nades - the RGD and RGO are an offensive anti-personnel fragmentation hand grenades of impact action. These will explode on impact, making it working very very well to throw at an opponent or object/wall close to your opponent.

The quest "The Huntsman Path - Controller" requires you to kill 2 blinded opponents. For this quest you can use both the M7290 grenade and the Zarya to cause the stun effect on your opponent. I would recommend going Factory while you are doing other quest(s) there at the same, since distance is always close and enemies very often low-geared, so it will be easiest to stun an opponent without dying beforehand. Alternatively, you can use a KS-23 with flashbang rounds, but these are locked behind a BEAR-faction quest nowadays.

We will talk about how to use stun grenades to fight A.I. & utilization later!

Smoke nades function exactly as you think, you can smoke an area, you can use it to block off sight from opponents or throw it on an airdrop to prevent people shooting you in the head when looking. Currently, you cannot use thermal sights like the FLIR or REAP-IR to look through smoke from smoke grenades.

Currently smoke grenades are not commonly used, hopefully we can see smoke nades more being used in the arena.

How to obtain grenades in Tarkov?

There's a few way to obtain grenades in tarkov:

Different trades sell different grenades. The most important grenades that are being sold in quantity by traders are:

All grenades can be FIR and sold on the flea market - but watch out, very often they are quite expensive. I recommend to stock up on 4 RGD-5 and F1 grenades from Prapor to make sure you always have plenty of grenades.

There's a few really good barters for grenades, and some grenades cannot be bought but only bartered. 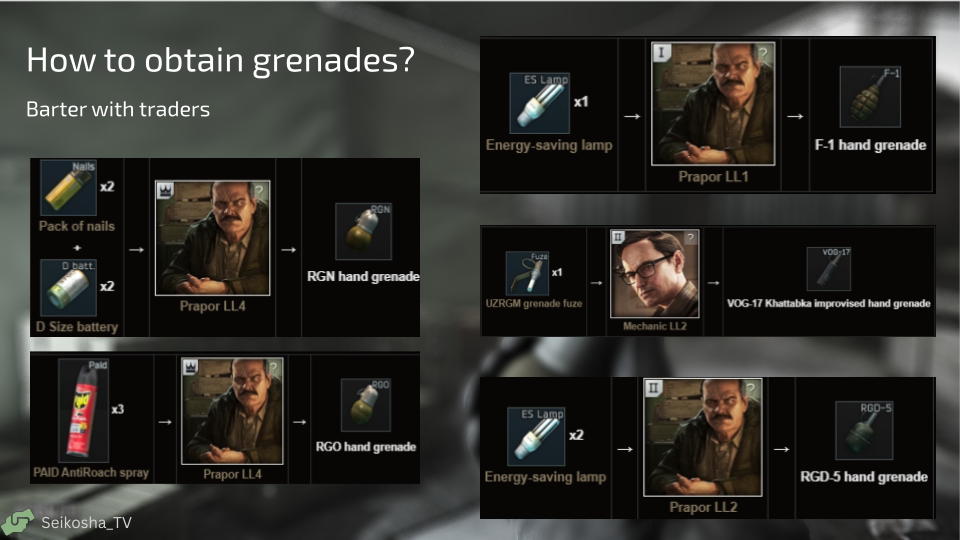 There's 2 crafts that you can do in the hideout, one for 8x VOG-25 at workbench level 1 and one for 6x RGD-5 at workbench level 3. They are not cheap, and therefor it is not recommend (better crafts to do at your workbench) but if you really want to stack up some VOG-25's, you can. 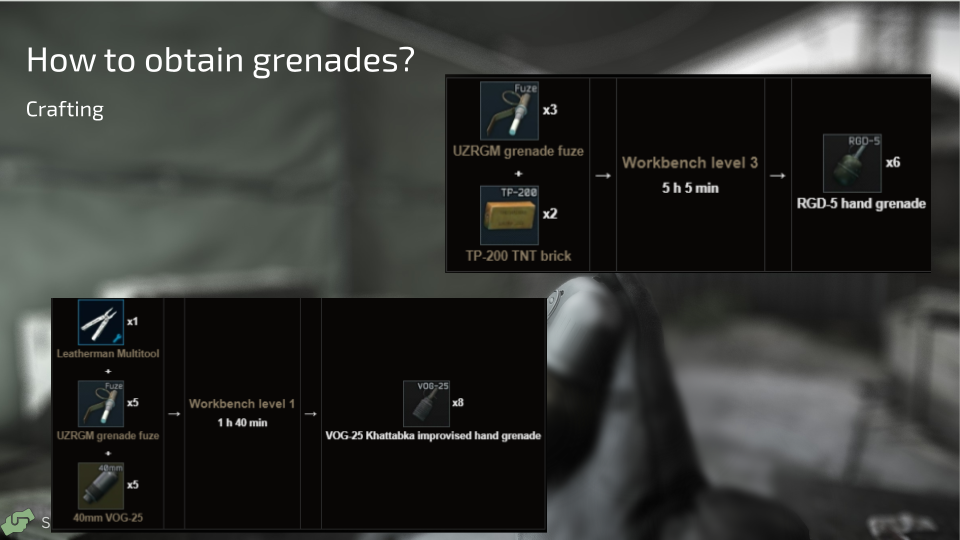 You can find the grenade container on pretty much every map in Escape From Tarkov, and they hold potentially every type of grenade and related barter materials (TP-200, UZRGM grenade Fuze, 40mm VOG 25).

Grenades work quite interesting in Tarkov - Every grenade has a explosion radius with a minimum and maximum radius, we can call that the impact area. In this area you will most certainly, definitely die.

Shrapnel of nades then act like bullets shooting all around and can even deflect. Each fragment also has it’s own ballistics stats, just like any other bullet, such as fragment chance, projectile speed, damage, pen power, armor damage, and light and heavy bleed chances. 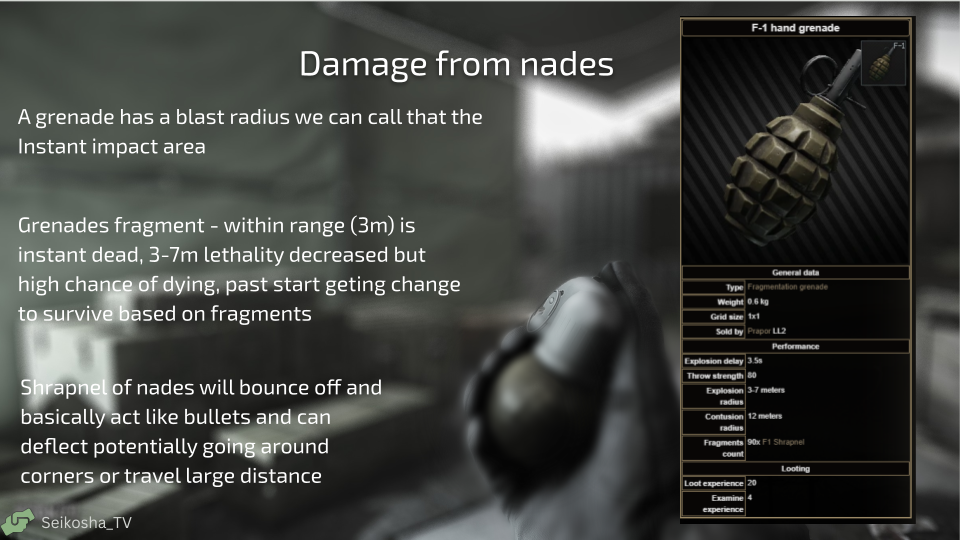 Use case that most people think of when using nades is to kill someone with it. When you know where someone (in cover) is, for example in a room or behind a rock, you throw a nade on them to kill them with it.

That's definitely not the only use, there are many ways you can utilize nades to your advantage.

Nades can perfectly be used as utilization to move the fight into your advantage. Let’s say you are stuck in cover or a room yourself, you can throw a nade out towards or even in the area you want to be “clear”, since most likely the opponent will have to move or reposition, and you can use that time to move and reposition yourself into a better angle.

On the opposite, let’s say the opponent is stuck and you want the opponent to move, you can throw a nade to flush them out and have them reposition, which gives you the opportunity to shoot them when they are moving.

Push with a nade

Throwing a nade not on the opponent, but in an area you want to push in to is a great way to move closer and in a better position, let’s say someone is holding an angle down the hallway, you can throw a nade there to make them unpeek or move just enough and then push straight after the nade to gain the upper hand. The M67 even allows for really smart plays since its long fuze time, so you can throw a nade and push over it since the opponent will not know its a m67 and can give you the drop on them when you unexpectedly push through.

A lot of people will react to a nade being thrown anyway, even if they are in cover or the nade is not close. This is a perfect distraction to peek and hold an angle (as they will have to repeek after) or even move during the nade utilizing the sound of the nade so that the opponent cannot hear what you are doing. It’s great to pull a flank too without them knowing instantly what you are going to do.

You can use nades or even flashbangs to flush out or gain information against A.I., so if you hear movement or are not sure if there is a.i., you can throw a nade and how a.i. reacts to that as normally they will reposition and this can give you information or even make them run into your angle. A.I. can also shoot randomly.

Flashbangs are great for information, cheap and quiet, and can be used to check if a boss is in a certain area, popular for people hunting killa as an example.

If you are going for stylish one - killa hunters use a flashbang to gather information on wheter scav(s) are in a certain position. Normally, they flashbang idea cafe / kitchen, oli between the shelves and near goshan elevator / medical tents.

How much grenades to bring?

This is a preference and depends on your playstyle, if you PvP alot you will see that you use more grenades compared to if you're questing and/or PvE more.

I normally bring 2 to 4 grenades a raid. But you should be using nades, in order for that many to be useful. Try to bring atleast one grenade for fights. If you picked up a thing or two from this guide and start using nades more, soon you won't be bringing less then 4 grenades anymore!

And that's it for our guide on how to use grenades in Escape From Tarkov!

If you prefer to watch and listen you can check out our youtube podcast below. If you have any questions, feel free to come by my twitch stream and ask any questions you have! 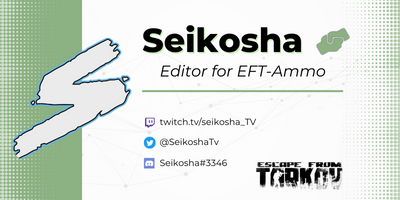 Escape From Tarkov Grenade Guide + 13 tips and tricks from Sherpas

Game content and materials are trademarks and copyrights of Battlestate Games and its licensors. All rights reserved.